There is a newly-discovered version of the legend of Pandora’s Box. In this third version insanity, despair, and hatred had overrun the world and Pandora, driven by a sense of hope, opened the box by unlocking it with a key. Out from the box rose up all the glories of humanity and they spread throughout the world with undiminished splendor. Pandora discovered that the glories had never disappeared, but it was humankind that had lost the key to identifying the magnificence that lay before them.

END_OF_DOCUMENT_TOKEN_TO_BE_REPLACED

… pathetically, only Hope remained inside. In the other version the box held all of humanity’s glories. When she opened the box progress, knowledge, and exaltation vanished into oblivion, forever lost to humanity.

Art, in all its forms, plays an exalted role as one of humanity’s glories. It also plays a profoundly personal role. Think, for instance, of the impact your favorite artwork has had on your life. Has it moved you to tears, to resolution, to moments of joy? Have you felt that an artwork was as close to you as a lover, a friend, or a child? Have you imagined what your life would be like without art? Picture your most beloved painting or recall your favorite song or regard your most treasured book and ask yourself what if it had never existed. Would that leave a gaping hole in your soul where once something precious had been? When Pandora opened the box, marvelous things rose up and vanished into space before her eyes. Without grasping the nature of this phenomenon, she unleashed Postmodernism on humanity.

END_OF_DOCUMENT_TOKEN_TO_BE_REPLACED

In treating any disease, it is important to identify the problem at its root. It is also important to find classic cases of the problem to illustrate clearly the results of the disease. Some of the cases here are not pretty and might be offensive. It will take some courage to follow me through the following series of articles as we investigate the nature of Postmodern Art. Fortunately the cure for this type of disease exists but, as with all treatments, we will have to act to eradicate this plague from our world. Come with me as we enter into the aftermath of the Greek daughter’s blunder…

There are two versions of the legend of Pandora’s Box. One version tells us that the box contained all kinds of misery. When Pandora opened the box a plague dispersed and doomed humanity to suffer ruin, insanity, and despair. She hastily closed the box to stop the plague but, pathetically, only Hope remained inside. In the other version the box held all of humanity’s glories. When she opened the box progress, knowledge, and exaltation vanished into oblivion, forever lost to humanity.

Today, in the here and now, both versions of the legend of Pandora’s Box are tragically true.

END_OF_DOCUMENT_TOKEN_TO_BE_REPLACED

A Wonder of the World. Gone.

To witness the obliteration of those glowing, lithe twins was a shock beyond comprehension. They were so playful; light danced on them as they stretched up towards the sky. They were so free; you could not say that they stood tall with pride because they were so unselfconscious of their beauty and height. They were so innocent; they believed in friendship, progress, creation, and joy. They were. 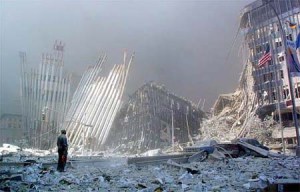 There are people in the world who can’t stand to see that beauty and creativity exist. The guy who took a hatchet to the Pieta of Michelangelo. The Taliban leader who chose to blow up the Buddhist cliff sculptures. 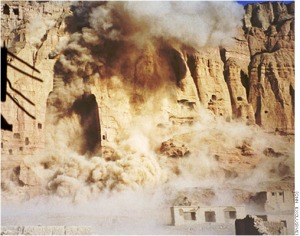