Ellipses: Don’t Start a Still-life Without ‘Em by Michael Newberry

Ellipses make or break any drawn plate, glass, or bottle. When beautifully done they transport the viewer to experience serene harmony. It’s rare not to have a man-made cylindrical object in a still life.

It should not be surprising that da Vinci painted/drew beautiful ellipses. This detail is a from The Last Supper–it is the plate in front of Christ.

The outer side, top, and bottom edges of the ellipses are always perfectly aligned: straight up and down and straight across on the horizontal. Think of a “+” sign.

Below, I overlaid the plate with a “+” in purple. This process is really pure math. Most artists make either the right or left side unbalanced and fail to keep the two outer edges on the same horizontal plane.

The exception to this would be if the surface that the plate is on or the plate itself is tilted. Then you would tilt the “+” to correspond with the tilt of the object.

A tricky part about ellipses is that there is a slight discrepancy in size between the back half of the plate and the front half. Notice that the top half of the green box is smaller than the bottom half.

In perspective, as objects are further away from us, they shrink; and as they are closer to us, they expand. Hence the difference between the front and back halves of the plate.

Here, for example, I have changed the angle of the table. The plate would still remain horizontal.

The last very important thing about ellipses is that the rim gets rounder, more circular, the further they are placed either above or below our eye level.

“Eye level” is literally the horizontal plane which is the same height as our eye, hence the term “eye level”.

In the diagram below, the blue line represents our eye level. The green ellipses get progressively rounder and open more as they get further way from our eye level.

For example, if you were looking across to a book shelf that had several shelves containing plates, the closest plate to the height of our eye level would have a very narrow rim, and a very wide rim on the lowest shelf.

Here is an example of ellipses from a recent charcoal drawing of mine. The eye level is somewhere near the top of the paper. There are three bowls and one plate; all on different heights below eye level.

The highest bowl has a very narrow rim and the black plate at the bottom of the paper has the roundest rim.

I hope you enjoyed seeing, in a fresh way, this very technical and mathematical side to the still-life. 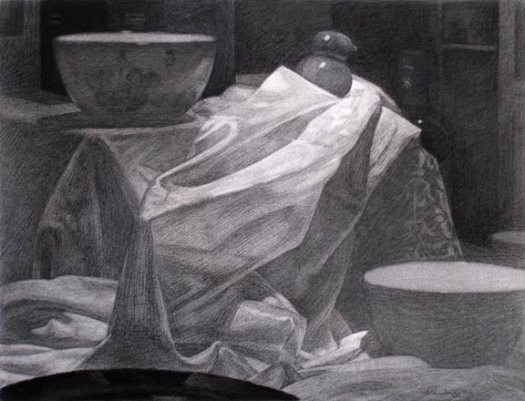 Just today created a new page titled LOVE on my website, temp link in bio, MichaelNewberry.com. I share my works on that theme and discuss the process on how to achieve that lofty goal. #love #art #adamandeve #figurativeart
Today, in honor of Iranians, I uploaded this earlier magazine article "Shipperheyn's Thus Spoke Zarathustra". It is about a masterpiece of contemporary sculpture and its subject of Zarathustra, perhaps the most important human in our human evolution. He defined "free will" 2700 years ago. I hope you enjoy it. 3-min read. Temp link in bio. As an aside, in both art and aesthetics, I try to create for history and universality. I think the article wonderfully triangulates our past, present, and hope for the future. #artreview #istandwithiranians #zarathustra #figurativesculpture #monumentalsculpture
I delivered this beautiful piece today to a friend, one of the world’s great tennis players. It was inspiring to listen to how he thinks, both warrior-like and very humble, with a kind of fascination for facts, no matter how disconcerting. It was day I will always treasure, and so early in the year too! You often hear that artists are never satisfied and those that are are brutally ignorant and don’t evolve, but I love this piece, the red is delicious and blows me away and the light on the cup is so bright it seems it is coming from inside the drawing. The shadowed bowl is literally nothing it is just the original dark paper, a slight of hand that feels unbearably satisfying. The genius opera legend, Leontyne Price, had advice to singers which was to “love your voice!” And I feel the same about art, love the energy. I am giving only one art workshop this year, a pastel painting/drawing boot camp in Provence, France, September 2020. Totally pampered except for the lessons, an equivalent of a University semester. Join us! #lifelessons #pastelpainting #pasteldrawing #stilllife #collector
Great Piece by @brett.holverstott.writer The Art of Illusion by Brett Holverstott: How Michael Newberry rediscovered the role of color in creating the illusion of depth and space. 16-min read, temp link in bio. #contemporaryarthistory #arttheory #artbio
Fun and Disturbing Postmodern Art News: Art Professor Charged with Attempted Murder. Temp link in my bio Fun disturbing Postmodern News. Art professor Rie Hachiyanagi at Mount Holyoke College was charged with the attempted murder of her colleague for unrequited love. Reportedly she bashed in the face of her victim with a “rock, garden shears and a fireplace poker” breaking several facial bones! Of course, she is innocent until proven guilty. But it is interesting to contrast the vicious violence of the act with her gentle flowery poetic and humble artist’s statement: “My work in performance and installation expresses both the concrete actuality and the ephemerality of life. Art is an experience set in a specific time and place.Such poetic occasions define the shape of my existence. “The process of making paper by hand allows me to be humble,As plant fiber and its beauty must be generated from nature.Our hands have brought paper into being.In paper resides a communion of nature and humanity.” Look at the creepshit of her artwork installations. This woman was the Professor of Art; Chair of Art Studio of a Massachusetts University teaching impressionable teenagers how art is made and how it works. Postmodernists are a pathological cult of oblivion, they should never be allowed teaching art or near children, because their outlook is rotten to the core. I do love it when art practice matches reality. #ReiHachiyanagi #postmodernart #artcriticismonline
Favorite Nine 2019! Wishing everyone a meaningful and wonderful New Year! #figurativeart
“What a fortunate opportunity to be included in an art trip to Arles, France in May 2019. History and beauty came together in this magical Mediterranean environment. Michael Newberry's unique mastery of light and shadows at the Van Gogh Museum in St. Remy, an ancient Roman Amphitheatre and a bird sanctuary in Camargue, brought these places to life, as we created pastel drawings. A gifted teacher, Michael spent every minute coaching us to observe elements we would not have been able to capture. Our guide Mathieu Brousses was magnificent and could not hide his love of the region. We visited only the most interesting places, all off the beaten path. I would do this trip again in a heart beat!” Susan Surber
My Christmas presents for family and friends. I’m sure some would like an appliance or fixture but D’s toilet just wouldn’t do. We have last minute guests so I scrounged around my traveling notebook. Since I don’t know what anyone likes I’ll let them choose for themselves. The leaves I drew just now. I hope someone picks the bones and wants a breast (study for Olympia). If any go unclaimed I will gladly mail it to you! Merry Christmas
Palm while waiting to have late brunch with friends I haven’t seen in a decade. We are meeting halfway. I’ll give it to them as a little souvenir