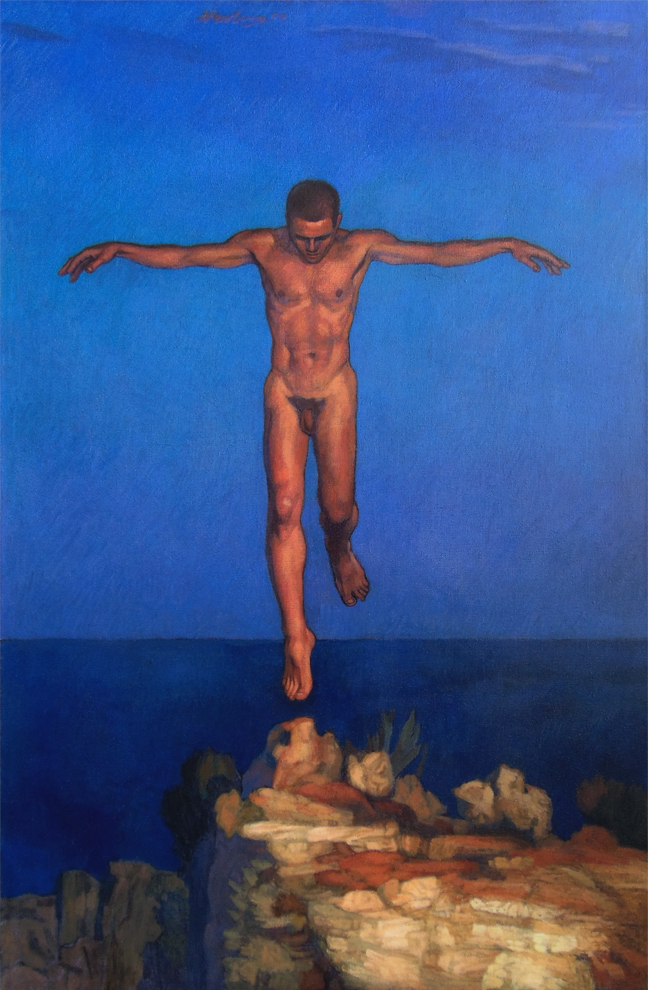 For many people, the sexy, entitled lifestyle of living on the luxurious mile-long stretch of Pacific coastline in La Jolla, California in the 1960s was the height of success. For me as a kid it was exhilarating to build up a salty sunburned sweat, leap into the air, and be able to execute a brutal backhand overhead smash on the tennis court. (Later I ended up playing pro tennis to pay for my art education in Holland). Afterwards, to cool off, I’d ditch my shoes and socks and run a few hundred feet from the tennis court and plunge underneath the perfect wave crests made famous by the Beach Boys, All Over La Jolla … Surfin’ USA! The feeling of freedom was omnipresent; no rules, no school if you didn’t feel like going; no homework; and no curfew. It was as if kids had a built in automatic path, their destiny awaiting them, meanwhile they could do anything. There was also stuff you couldn’t talk about … which was way too complex for a kid to cope with. And later shushed because it involved people still alive. I lived in a world of physical fun with an ominous feeling that not all was well when you scratched the surface.

Rembrandt opened a world of understanding for the negative stuff and for the romantic feelings I felt. So off I was launched into the world with no boundaries, no ethics, full of myself, no limits, no reservations, and spiced with a deep longing for mental and physical exaltation. Oddly I had one terrible guilt complex; I was afraid that people would see my inner splendor and not relate to it.

In art school I was introduced to the bullshit school of postmodernism. The only use it could be for me would be if I threw away my talent, heart, and knowledge and wallowed in the fucked up world of pathetic anti-artists. Its aesthetic does not apply to a skilled, intelligent, and free-spirited person with a lust for love and life. Such an awkward situation. The art world was no place for me, yet the art world was no place for art as I knew it either. So I carried on reaching for the most sensual high note I could find.

Art is a Self-Portrait

Some of us are lucky enough to experience love on a level that realizes our potential for bliss. I did, and that confirmed that there were real people out there that my art could speak to.

Art is a sum total of the artist’s senses, thoughts, and emotions. Art is not an abstraction that is outside somewhere, and it is not a critique of what other people do. Art is a spiritual self-portrait of the artist. If they are a piece of shit, their art will reflect that, sometimes literally so. Critics and collectors often rationalize horrible works, and tell us that the artist is purposely making us uncomfortable by exposing us to horrors with the aim to make the world the better place. Secretly they feel relieved that the world is nasty and pathetic as that is how they feel about themselves. But this also holds true about artists that project love, their best, and compassion for the human spirit. It is a genuine, real, and a benevolent view of existence; and belief in human potential.

This is the mindset from which Icarus Landing came about. It was my reward for sticking to my guns, to being free, to exploring, and to soaring.

The colors and composition are superb. His body seems real — the arms especially — like he actually is in the act of alighting. And the thematic elements are so rich — reversing both the Greek and Christian messages: success following boldness rather than failure following boldness; and a quietly confident success rather than suffering and sacrifice.

Looking at Icarus, I had a passing thought that you did for the Icarus legend what Rand’s character Richard Halley did in making of the Phaethon legend a triumph. And afterwards I was reminded of Susan’s McCloskey lectures…in which she explained how Rand was aware of the epic figures and forms from the two major traditions in western civilization, the Greco-Roman and the Judeo-Christian, as exemplified in the characters of Odysseus and Jesus, and how with her characters in Atlas Shrugged Rand both incorporated and transcended those traditions. Your Icarus does that with the substance and symbolism of the Greek Icarus and the Christian crucifixion. Incredible.

Icarus lands carefully back on Earth, armed with the knowledge that freedom has lessons for us that can’t be learned but must be experienced and acted on. And with that experience comes accepting fearlessly our very best.